Sharing King Cakes during Mardi Gras season is a cherished Gulf Coast tradition, but it wasn’t until college that I realized King Cake folklore isn’t universal. Jaws dropped when I explained there’s a prized baby Jesus baked inside! There are competing interpretations of what it means to eat the slice with the baby. In some circles, he or she who finds the baby is declared King or Queen for the day while in others finding the baby means bringing the King Cake next Mardi Gras. Any way you slice it, King Cakes are fun for all. Even if you don’t buy the King Cake superstitions, who can object to a giant, glorified cinnamon roll? Not us!

A homemade King Cake isn’t the easiest feat, but you should try it once! Especially if you’re nowhere near the third coast. 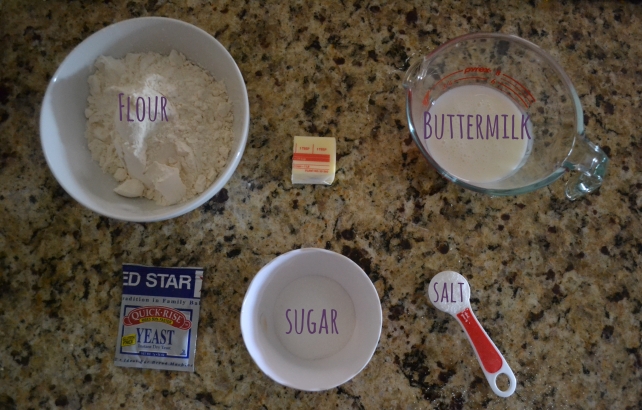 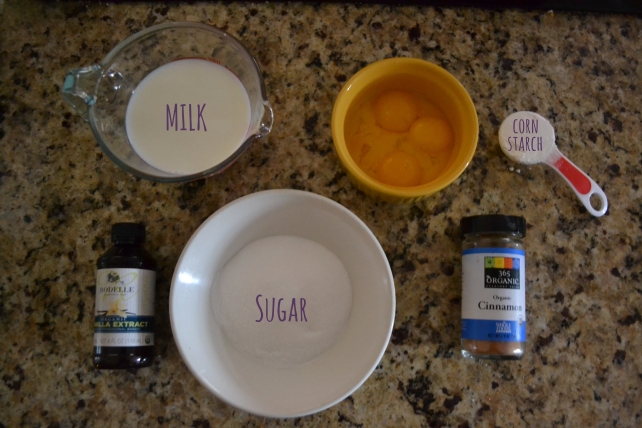 Start by making the dough. Combine all ingredients in the bowl of a stand mixer & mix for 15 whole minutes. I know this seems like a crazy long time, but alas! it works and your dough will be a silky ball after 15 whole minutes. Transplant your ball into a greased bowl covered with plastic wrap and leave to proof for ~2 hours. Note: your dough would be much happier proofing in an environment resembling the Gulf Coast (~80 – 90 degrees) than a drafty DC kitchen, but we made do!

While your dough is proofing, make your filling. To make your cinnamon filling, start by combining your milk & sugar in a small saucepan. Stir rigorously to dissolve all the sugar. Once the milk & sugar mixture starts to boil, lower the heat slightly. Combine your cornstarch, vanilla, and egg yolks in a measuring cup & then add some of your warm milky mixture to the egg mixture (temper your eggs). Then, add your tempered eggs to the hot milk mixture, slightly elevate your heat, and continuously whisk your mixture until it begins to boil & the mixture resembles a thick custard. Remove custard from heat, cover & place in the fridge to chill. Once chilled, stir in cinnamon.

To make your cinnamon sugar mixture, combine all ingredients!

Once your dough is proofed, you get to play with it!

Now leave this to rise. Should rise for 90 minutes to 2 hours, although mine didn’t get greatly larger in size (it should double!).

To make your icing: cream cream cheese until soft, add powdered sugar, milk, vanilla & pinch of salt. Add powdered sugar until your icing reaches desired consistency. I went with a thin icing to drizzle over my cake through the tip of a Ziploc turned piping bag.

Once your cake cools, drizzle with icing and decorate with yellow, green, and purple colored sugars (you can make these yourself with a few tablespoons of sugar and a few drops of food coloring!). If your trinket’s plastic and could easily melt, we recommend slipping it into a seam after your cake has cooled. If you’re using something heartier like a penny, you could pop it in before your cake goes in the oven. To each her own!

I’m sure you all have many a nostalgic childhood memory of York Peppermint Patties (who doesn’t?). Maybe your grandmother always had peppermint patties on hand or there was one of these cardboard dispensers at one of your favorite restaurants. My favorite burrito cart–Pedro & Vinny’s–hands out peppermint patties to soothe the palette post-over-indulgence in the spice of their famous goose & spicy cilantro sauces, and this simple & satisfying after-meal sweet helped rekindle my love for these shiny silver treats & I encountered the homemade inside-out version at a friend’s Thanksgiving party. Assembly is slightly time-consuming, but preparing the components of these PepPats couldn’t be simpler!

1/2 a stick of softened cream cheese

Start by creaming together your cream cheese & butter, then gradually begin adding your powdered sugar. Add the peppermint extract and take a taste to make sure the minty-ness suits your tastebuds. Chill your creamy patty mixture. Then, make your ganache. Chop, chop, chop your chocolate and heat your half & half in the microwave. Dump your chopped chocolate into the hot milk and stir, stir, stir like crazy. Your mix will be pretty thick, but I recommend chilling for at least 30 minutes in the fridge or 15 minutes in the icebox.

Once both have had an opportunity to chill, start rolling & piping. Take a small spoon and scoop tiny balls, roll them between your palms (you may want to lightly grease your hands with a neutral oil). I rolled ~6 at a time and then piped the chocolate ganache on top. You could of course use a real piping bag, but these HungryTexans prefer Ziplocs. Put your ganache in the bag, snip the tip, and start piping. Just a dollop of chocolate on each patty! Voila, inside-out peppermint patties.

I recommend keeping these PepPatts chilly. These treats will make everyone from coworkers to mingling singles smile.

Put some “pepp” in your step!

Two Saturdays ago I helped sort 7,000 Thanksgiving pies sold as a fundraiser for one of my favorite DC nonprofits, Food & Friends. In case you were wondering, 7,000 pies looks like this about 6-times! This pecan pie recipe is poco complicado, but as you read and mentally prepare yourself to recreate its splendor, if you ever think you’re ready to “next!” this recipe, take a deep breath and remember you’re only making one…not 7,000!

Before we get into the thick of it, there are a couple of things you need to know.

My recipe features pecans three ways–as a meal in the crust, whole on the bottom of the crust, & chopped in the filling–and its inspired by Tabard Inn’s Crust & Cooks Illustrated’s filling. To embark on this pie prepping adventure, you’ll need:

Let’s start with the crust, shall we? First pulse your cup of pecans & sugar in a food processor; pulse until it’s a fine meal. Add flour, butter & salt and continue to pulse until the butter is super crumbly. Then add the eggs and half & half. Once your dough is in a nice ball, flatten it out between two pieces of parchment paper. Chill in the fridge until you’re ready to bake it. When it’s time to bake, roll or use your hands to fit your crust into a pie pan. Be sure to poke your crust with a fork (many, many times) and then bake for ~20 minutes at 350. I covered mine with parchment paper. True story, I didn’t have pie weights and my crust definitely rose a little. Once it got out of the oven, I needed to smoosh it back down to its home in the pan. Remove once it’s golden brown.

While your crust is baking is the perfect opportunity to make your filling! Setup a double boiler and melt your butter. Then mix in your sugar & salt. Then beat in eggs, corn syrup, and vanilla. Pop your bowl back on your double broiler & stir, stir, stir until your mix is shiny and warm. Remove the bowl from the heat & stir in your 2 cups of toasted chopped pecans. Ta da! You have filling.

Now this is exciting. Take your toasted whole pecans and pop those little guys on the bottom of your crust. Drizzle dulce de leche all over the pecan-filled pie crust. Then pour in your filling. Alas! It’s time to bake this baby. Pop it into your still hot 350 degree oven for 35-45 minutes or until your pie filling stands up to a  toothpick test. Let your pie rest until it’s time for dessert (or an extra decadent afternoon treat!). I garnished ours with some Grand Marnier whipped cream & it was the perfect cream to cut the sweet.